“We all know that Art is not Truth. Art is a Lie that makes us realize the Truth, at least the Truth that is given to us to understand” – Pablo Picasso.

Pablo Picasso was born in Malaga, Spain, on 25 October 1881, he was the first child born in the family. His father worked as an artist, and was also a professor at the school of fine arts; he also worked as a curator for the museum in Malaga. Pablo is one of the most influential painters and artist of his time, he is also one of the most recognized figures of the 20th century.

Pablo Picasso studied under his father for one year, later joined the Academy of Arts for one year, prior to moving to Paris. In 1901 he went to Paris, which he found as the ideal place to practice new styles, and experiment with a variety of art forms. It was during these initial visits, which he began his work in surrealism and cubism style, which he was the founder of, and created many distinct pieces which were influenced by these art forms.

Pablo Picasso is recognized as the world’s most prolific painter. His career spanned over a 78 year period, in which he created: 13,500 paintings, 100,000 prints and engravings, and 34,000 illustrations which were used in books. He also produced 300 sculptures and ceramic pieces during this expansive career. It is also estimated that over 350 pieces which he created during his career, have been stolen; this is a figure that is far higher than any other artist throughout history.

Sale of his works

Pablo Picasso has also sold more pieces, and his works have brought in higher profit margins, than any other artist of his time. His pieces rank among the most expensive art works to be created; with a price tag of $104 million, title: Garson a la Pipe, painted in 1905 was sold in 2004. 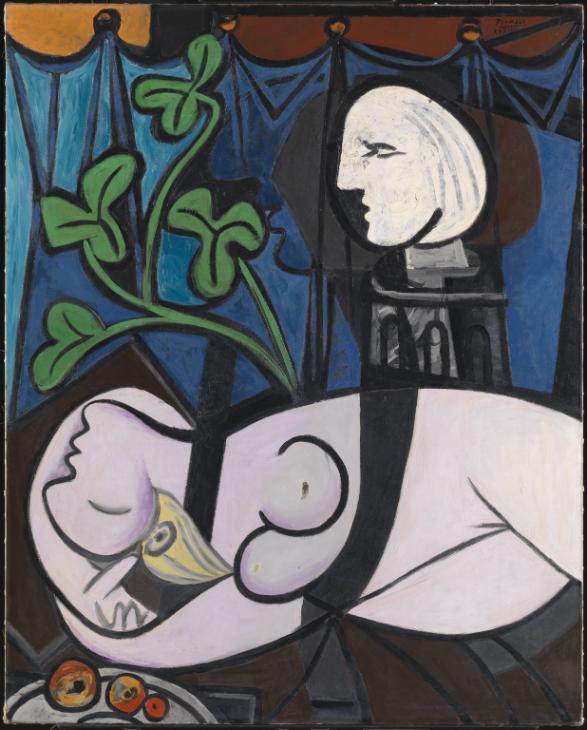 Picasso first encountered Marie-Thérèse Walter in January 1927. He kept their relationship secret for many years, even from some of his closest friends, but particularly from his wife Olga. In 1931-2 he embarked on a series of sculptures and paintings of Marie-Thérèse, made at his studio in the Chateau de Boisgeloup, which he had purchased in 1930. Picasso’s habit of dating his work very precisely makes it possible to trace the development of this sequence as Picasso discovered an increasingly complex manipulation of her body. Made on 8 March 1932, Nude, Green Leaves and Bust is the most intense among the group of large nudes, counterpointing the real head with a sculpted head, and the folds of Marie-Thérèse’s body with the luxuriant forms of a philodendron plant. The setting includes a secretive curtain against which the sculptural bust casts a double shadow, as if the white of the foreground nude was literally illuminating the space.

The WORLD record for most expensive work sold at auction was Francis Bacon’s triptych Three Studies of Lucian Freud, which sold for $142.4m at Christie’s in November 2013. 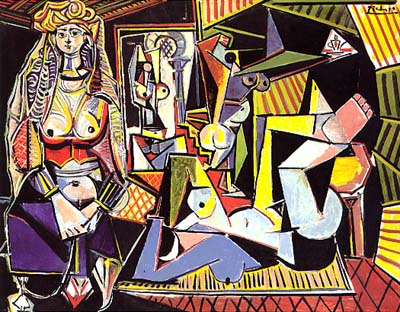 Monday 11th May 2015 at the Christies Auction in New York claim the World record for the highest value of $160 million for his painting title: “Women of Algiers”. Picasso embarked on a series of interpretations of some of his favourite paintings. Women of Algiers painted in the 1950s, is one of his responses to a sensuous eastern fantasy of harem life painted by Delacroix in 1834 that hangs in the Louvre.

AS an organisation we would appreciate your collective views and use our time here in the creative lounge to discuss, what implication if any does this meant to you, we would appreciate your comments as artists around the WORLD.., As Art consultants, Art dealers, Galleries & Museums, Art Critics,  and Art Collectors what do you see this to be a positive or negative sign for The ARTWORLD or would this have any bearing to influence the Future of ART?.  And finally select three of your favourite Picasso paintings?

We open our platform for further discussion.

Picasso would have been surprised by this value. In life it would !!

In my view not one of his greatest. It had not been seen for years so that may partly account for the extraordinary price.

I do not understand the information of evaluation of the Houses of Auctions, I think that not always the painting is in proportion with its evaluation… Picasso knew to sell his work in its time, he was also a genius of the marketing… Appoint 3 works by Picasso, among my favorites, is not easy:

“Marie-Thérèse, Face and Profile” “The pigeon pea” “The soup”

I believe Picasso, whether you like his work or not, proves to be the ultimate in creativity…..and this is why he is so widely recognised and appreciated. Plus how can an artist paint over 13,000 paintings and 100,000 prints and not go noticed?

I think Picasso’s works are all time favourite to all and in numbers he was a very versatile among artists.

I agree with your comment Lucia; it seems that all Picasso’s works are master pieces… and they are not, as you said they are marketing, so its going with Van Gogh, Andy Warhol, Jeff Koons, Damien Hirst…

What a wonderful opportunity for us to review and discuss the work of one of the Great Masters..,

We look forward to receiving more comments from rest of our members. Enjoy rest of your Thursday.

Sales such as this and the art market generally ought to have no bearing on the production of art and it’s organic progress. The only bearing it has is a negative one where the general public is once more astonished by the ridiculous amount of money that is awash in the market and how it negatively colours their perception of art generally. I love Picassos work but what I love more is the idea of spending that money more wisely in a world full of poverty and ecological disaster. If I was Picasso I would be spinning in my grave at the thought that my work was being used as a hidden trophy and not as a source of joy to the many! My three favourites?

Unfortunately auctions or art sales when huge sums of currency are paid for art,is the true indicator of controlled art markets.While it seems an obvious simplistic statement,its relevancy is great.This type of thinking is an indicator of growth of art markets existing for centuries as art value grew to equalize how artist recognition is/was based,what artists would be offered gallery representation,a range of exhibitions + oft paid for non-critical reviews(either through contacts or contractual ventures,meaning how much money gallery’s paid for advertising in magazines,newspapers,radio or other media outlets)to higher recognition by eventual museum collections when friendship or business stepped in to control even those(museum)cherished collections.Remember>even Van Gogh,ignored in his day,never sold an artwork.The Reality:>>> A once relatively small wealthy strata always controlled the art market.That strata grew greater in strength and larger in number as the wealthy class grew in numbers.It’s basically a common truth living within the Art World.Nothing more,nothing less.You live with this truth as an artist.It’s an absolute no one has any control over.And if you love art or creating art,you simply always ignore this reality!

While there is certainly much more that can be written about this statement above ~~> including true stories of how certain artists were given there place and acknowledgement in museums via their varied connection/connections and others by a known “payola” process ~~~> certainly great honesty and a true museum selection process plays the greater roll. Regardless, artists should not be creating art because they want some form of recognition. Artists should only create art because it captured their wonderment and imagination at some point in life. And they continued because creation in and of itself is eternal. The only satisfaction should exist in creation’s completion and perhaps, its sharing. Many of my own artworks exist in quiet, unknown places near rivers, in forests and elsewhere. There are works in collections and I’m grateful for this. I’m eternally thankful I’m still physically able to create regardless of anything else affecting or effecting my life. I’m fortunate to be considered an artist and writer. The span of my being is insignificant. Life and creating are significant and own the greater expanse of my soul. …jmc

Thank you for visiting us today have a Creative inspiring day!!!

1 Comments on “PICASSO’s The Three Kings?”